How to spend Australia Day in Sydney – 26 January 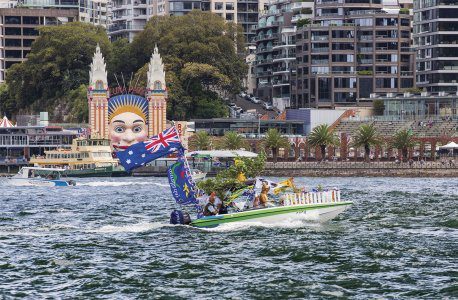 How to spend Australia Day in Sydney – 26 January

Australia Day on 26 January marks the anniversary of the arrival of the British First Fleet in 1788, though this symbolic day represents much more.

It is a day of reflection and to celebrate the diversity of modern Australia, our early history, and the significance of the Aboriginal and Torres Straight Island people to our country and cultural identity.

Here are our top tips on how to enjoy your Australia Day in Sydney.

A fun family day in Coogee with free splish, splashin’ entertainment at Goldstein Reserve just a short walk from the hotel, with a number of waterslides and inflatable amusements.

From 7:45am to 8:30am, witness a mesmerising morning ceremony honouring Australia’s Indigenous ancestors, with Indigenous singers and dancers performing traditional song and dance as the Aboriginal flag and the Australian flag are both raised on the Sydney Harbour Bridge.

Grab a spot by beautiful Sydney Harbour to see the display of colourful of boats all striving for the ‘Best Dressed Boat’ honour. Departing from Milsons Point at 12:45pm, before cruising a loop around the harbour and finishing at Athol Bay by 2:15pm where the winners will be announced.

The Sydney Opera House Forecourt will host some of the nation’s most accomplished musicians including Guy Sebastian, John Paul Young, Casey Donovan, Marcia Hines, Christine Anu, Dami Im, Anthony Callea and more. Held from 7:30pm to 9:30pm for a performance that will also be aired live on Channel 10. A ballot form will offer tickets to the lucky winners.

Cinema under the Stars

Catch a film from what has been described as ‘the world’s most beautiful cinema’. On Australia Day, St George OpenAir Cinema at Mrs Macquarie Point will screen ‘Ocean Life: The International Ocean Film Tour’ which is an inspiring ocean adventure, and the biggest water sports action and environmental film of the year to hit the big screen.

The humble Vanilla Slice is an Australian retro classic, made of sweet pastry, real custard and icing. As part of SBS Food’s #BringBackTheClassics campaign, Black Star Pastry has brought this sweet treat to their menu, available at Moore Park – a short stop from Coogee. For a modern twist, they have Mango Passionfruit, Pandan Kaya and Strawberry Vanilla flavours available.

A kaleidoscope of colour at Sydney Festival

Each January, Sydney transforms into a bold, colourful celebration of music, theatre, dance, circus and art with both free and ticketed events for all ages. 2018 dates are 6-28 January.

Highlights on the 2018 program:

1. Jurassic Plastic at Sydney Town Hall, marvel at the dinosaur sculptures made from discarded toys.

3. Glitterbox at Hyde Park North, a private dance party in public. Bring friends and dance the night away in a glowing, glitter-filled rave cube while the public on the other side of the one-way-mirrors envy your moves.

Start the day right with a rejuvenating swim at Coogee Beach, renowned for its calm, protected waters and lifeguard patrolled waters. The spectacular Wylie’s Baths ocean tidal pools are also just around the corner from the hotel, and a perfect spot to spend the day with a picnic basket full of Australian goodies. Pass the lamingtons…

To book your Sydney seaside break, staying at Crowne Plaza Coogee Beach, contact our friendly team on +61 2 9315 7600 or at reservations.crowneplazacoogee@ihg.com

Weekends in Coogee, like the locals.
A Coogee Spring Fling
Spring Racing Fever in Sydney
Bloke’s Weekend in Coogee
A sporting time in Coogee
What’s On in Sydney This Summer
Top 5 Summer Events – How Many Will You Tick Off?
Christmas In Coogee
Kid-friendly ideas for your holiday
A Coogee Easter by the Beach